Endometriosis is an enigma; we don’t have a sound proof for its etiological origin but only have speculated theories. Endometriosis is a benign, estrogen-dependent disease characterized by endometrial tissue located outside the uterus. It affects 5–10% of women of reproductive age. Symptoms include: chronic pelvic pain, dysmenorrhea, dyspareunia and or infertility. First description of the disease was by Rokitansky more than 130 years ago. Karl von Rokitansky (1804 -1878) worked as a pathologist in Vienna. He said that the origin of endometriosis is from the shed endometrial fragments from retrograde menstruation implant.

Approximately 17% of subfertile women have endometriomas. 20–40% of women who undergo reproductive technology (ART) have endometriosis with or without endometrioma. There is no general consensus regarding the proper management of women with ovarian endometrioma who wish to conceive. The pathogenesis of endometrioma is a controversial topic, and it arises either by invagination of shed blood or metaplastic cells.

Ovarian endometrioma affects 17–44% of women with endometriosis and was described by Hughesdon in 1957. Endometrial implants, located on the surface of the ovary, are the cause of endometriomas as the implant bleeding are trapped and cause a gradual invagination of the ovarian cortex, which results in a psuedocyst, It means that an endometrioma cyst can never be enucleated intact. If you did it means you are taking out ovarian tissue.

The gold standard for diagnosis of endometrioma is laparoscopy. However transvaginal ultrasound and magnetic resonance imaging (MRI) could help in the diagnosis. Endometriomas can occur unilaterally or bilaterally, and approximately 28% of endometrioma are bilateral. Women with endometrioma have many of endometriosis symptoms: Pain, dyspareunia, subfertility. Comparing IVF outcomes in women with endometriosis with Control (tubal factor infertility), the results are conflicting. A group of ten university hospitals in Japan found no significant difference in fertilization, cleavage and pregnancy rates between endometriosis and tubal factor infertility patients and they found in another retrospective study similar implantation, pregnancy and live rates per cycle. However the endometrioma patients had a higher cancellation rate. Endomerioma could and could not have an adverse effect on IVF results. Cancellation rates are higher and poor results are common especially for associated deep endometriosis.

Treatment of endometrioma is controversial. It depends on a variety of factors including, ovarian reserve prior to treatment, cyst laterality, location, patient age and prior treatment.

Although medical treatment such as oral contraceptives has been shown to reduce symptoms of ovarian endometrioma, its use is not welcomed in women trying to conceive. Interventional treatments include laparoscopic cystectomy, aspiration, laparoscpic ablation.

Laparoscopic cystectomy, a conservative surgical procedure, is a controversial treatment for endometriomas due to the invasive nature of the surgery. It strips the cyst wall; the portion of the cyst containing the endometrial tissue. It decreases recurrence rates, increases the chance of spontaneous pregnancy and leads to significant reduction in pelvic pain. After one procedure, recurrence rates range from 9.6 to 45%.However, the main controversy associated with cystectomy is its damage and removal of healthy ovarian cortex and follicles, leading to a decrease in ovarian reserve. Post operative ovarian scarring decreases ovarian volume and interferes with ova retrieval during subsequent ART procedure. Ovarian failure, a serious risk associated with cystectomy, has been reported after bilateral endometrioma cystectomy, with rates ranging from 2.3 to 3.03%.

Aspiration by transvaginal ultrasound is a noninvasive option. There are three common risks associated with the procedure: recurrence, infections and adhesions but it preserves the ovarian tissue and its recurrence rates is not that much different than cystectomy.

Aspiration with sclerotherapy; where TVS aspiration is followed by injection of 95% ethanol or methotrexate to destroy the cyst wall might reduce the rate of recurrence.

So, risks associated with surgical procedures for ovarian endometriomas are high and proper treatment protocol is a matter of debate. There are no well-designed randomized control trials using nonintervention as a potential treatment option for endometriomas due to ethical reasons. 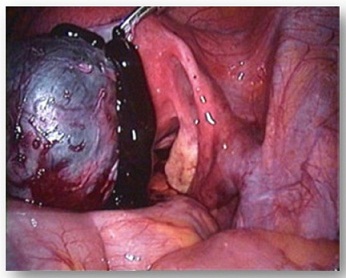 Lapatoscopic cystectomy is appreciated for cysts larger than 4cm in young patients.

Consider aspiration by transvaginal ultrasound if you are worried about the ovarian reserve. I don’t think that laparoscopic cystectomy for patients seeking for pregnancy are the first option.